How Evan Roberts hungered and prayed down the Welsh Revival

“For ten or eleven years I have prayed for a revival. I could sit up all night to read or talk about revivals. It was the Spirit that moved me to think about this.

“One Friday night last spring, when praying by my bedside before retiring, I was taken up to a great expanse — without time and space. It was communion with God. Be-fore this a far-off God I had.  (Shaw, S. B.. The Great Revival in Wales, Kindle )

But one night, after I had been in great distress praying about this, I went to sleep, and at one o’clock in the morning suddenly I was waked up out of my sleep,

and I found myself with unspeakable joy and awe in the very presence of the Almighty God. And for the space of four hours I was privileged to speak face to face with Him as a man speaks face to face with a friend. At five o’clock it seemed to me as if I again returned to earth.”

“Were you not dreaming?” I asked.  “No, I was wide awake. And it was not only that morning, but every morning for three or four months. Always I enjoyed four hours of that wonderful communion with God. I cannot describe it. I felt it, and it seemed to change all my nature, and I saw things in a different light, and I knew that God was going to work in the land, and not this land only, but in all the world.”

From that hour I was taken up into the divine fellowship for about four hours. What it was I can not tell you, except that it was divine. About five o’clock I was again allowed to sleep on till about nine."  “At this time I was again taken up into the same experience as in the earlier hours of the morning until about twelve or one o’clock….This went on for three months."

He then refers to the Convention at Blaenaunerch, Cardiganshire, last August: — “The 7 o’clock meeting was devoted to asking and answering questions.  Rev. W.W. Lewis conducted. At the close Rev. Seth Joshua prayed, and said during his prayer, `Lord do this, and this, and this, etc. and bend us.’ He did not say, `O Lord, bend us.’ It was the Spirit that put the emphasis for me on `Bend us.’ `That is what you need,’ said the Spirit to me. And as I went out I prayed, `O Lord, bend me.’ 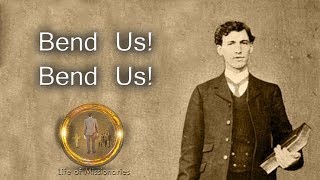 “Henceforth the salvation of souls became the burden of my heart. From that time I was on fire with a desire to go through all Wales, and if it were possible I was willing to pay God to allow me to go. A plan was agreed upon, and eight of us were to go through Wales, and I was to pay all expenses"

Evan Roberts had, he said, been praying for 13 months, for that wave to come, and he related how the young man was turned out of his lodgings by his landlady, who thought that in his enthusiasm he was possessed or somewhat mad. He spent hours praying and preaching in his rooms, until the lady became afraid of him, and asked him to leave.

“It went on all the time until I had to go to Newcastle Emlyn to the college to prepare for the ministry. I dreaded to go for fear I should lose these four hours with God every morning. But I had to go, and it happened as I feared. For a whole month He came no more, and I was in darkness. And my heart became as a stone. Even the sight of the Cross brought no tears to my eyes. So it continued until, to my great joy, He returned to me, and I had again the glorious communion. And He said I must go and speak to my people in my own village.

The Story of the Welsh Revival by Eyewitnesses .

“I did not go to my people, but I was troubled and ill at ease. And one Sunday, as I sat in the chapel, I could not fix my mind upon the service, for always before my eyes I saw, as in a vision, the schoolroom in Lougher, where I live. And there, sitting in rows before me, I saw my old companions and all the young people, and I saw myself addressing them. I shook my head impatiently, and strove to drive away this vision, but it always came back. And I heard a voice in my inward ear as plain as anything saying, ‘Go and speak to these people.’ And for a long time I would not. But the pressure became greater and greater, and I could hear nothing of the sermon. Then at last I could resist no longer, and I said, ‘Well, Lord, if it is Thy will, I will go.’ Then instantly the vision vanished, and the whole chapel became filled with light so dazzling that I could faintly see the minister in the pulpit, and between him and me the glory as of the light of the sun in Heaven.”

“And then you went home?”  “No; I went to my tutor and told him all things, and asked him if he believed that it was of God or of the devil? And he said the devil does not put good thoughts into the mind. I must go and obey the heavenly vision. So I went back to Lougher, and I saw my own minister, and him also I told. And he said that I might try and see what I could do, but that the ground was stony and the task would be hard.”

“Did you find it so?”  “I asked the young people to come together, for I wanted to talk to them. They came and I stood up to talk to them, and, behold, it was even as I had seen in the church at Newcastle Emlyn. The young people sat as I had seen them sitting all together in rows before me, and I was speaking to them even as it had been shown to me. At first they did not seem inclined to listen; but I went on, and at last the power of the Spirit came down and six came out for Jesus. But I was not satisfied. ‘Oh, Lord,’ I said, ‘give me six more—I must have six more!’ And we prayed together. At last the seventh came, and then the eighth and the ninth together, and after a time the tenth, and then the eleventh, and last of all came the twelfth also. But no more. And they saw that the Lord had given me the second six, and they began to believe in the power of prayer.”

“First I tried to speak to some other young people in another church, and asked them to come. But the news had gone out, and the old people said, ‘May we not come too?’ And I could not refuse them. So they came, and they kept on coming. Now here, now there all the time, and I have never had time to go back to college.”

Three meetings every day, lasting, with breaks for meals, from ten A. M. till twelve P. M.,

“Revival is the highest kind of Christianity. I desire to give my life, which is all I have to give, to helping others to find it also.” 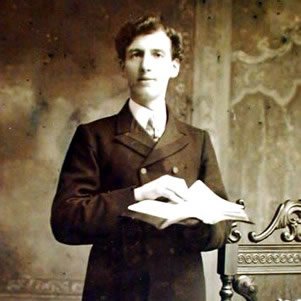 This is my work as He has pointed it out to me. His Spirit came to me one night, when upon my knees I asked Him for guidance, and five months later I was baptized with the Spirit. He has led me as He will lead all those who, conscious of their human weakness, lean upon Him as children upon a father.

“The Lord is my Shepherd. I fear no want.” All things necessary He has provided, and will provide. I wish no personal following, only the world for Christ.

I believe that the world is upon the threshold of a great religious revival, and I pray daily that I may be allowed to help bring this about.

I beseech all those who confess Christ to ask Him today, upon their knees, if He has not some work for them to do now. He will lead them all as He has led us. He will make them pillars of smoke by day and pillars of fire by night to guide all men to Him.

The world will be swept by His Spirit as by a rushing, mighty wind.

The whole world will hear His message of “peace, good-will toward men,” and listening, will be blessed. Thousands upon thousands will do more than we have accomplished, as God gives them power. This is my earnest faith, if the churches will but learn the great lesson of obedience to the voice of the Holy Spirit. Obedience! Obedience!! Obedience!!!

Prayer became sustenance to him. “It means more to me than food,”

There are no enquiry rooms, no penitent forms, but some worker announces, or an enquirer openly confesses Christ, the name is registered, and the song breaks out, and they go back to testimony and prayer.

In connection with the Welsh revival there is no preaching, no order, no hymnbooks, no choirs, no organs, no collections, and, finally, no advertising.

In the Welsh Revival, pastors and preacher are no longer the focal point of the church.  Not much preaching from preachers in the W. Revival, because in revival the Holy Spirit empowers almost every convert to preach the gospel to their cities.

No choir or songbooks was needed, every believer and convert are the “choir".

No advertising. the whole thing advertises itself. You tell me the Press is advertising it. I tell you they did not begin advertising until the thing caught fire and spread. And let mime say to you, one of the most remarkable timings is the attitude of the Welsh Press. I come across instance after instance of men converted by reading the story of the revival in the Western Mail and the South Wales Daily News.

What is the secret of this movement? On man’s part, believing, persevering prayer; on God’s part, the promised answer.

Brainerd could say of himself: “I cared not where I lived, or what hardships I went through, so that I could but gain souls for Christ. All my desire was for the conversion of the heathen, and all my hope was in God."

Matthew Henry said: “I would think it a greater happiness to gain one soul to Christ than mountains of silver and gold to myself."

“Bend the Church, and save the world,” is the watchword of this revival.

-The Story of the Welsh Revival by Eyewitnesses

One of the special marks of the revival in Wales was emptying the saloon. Revival will blow to atoms the saloon, the brothel, and the gambler’s pit